New questions in this issue: Welcome to FAQs on the Markets and Economy! On the Radar is a biweekly publication providing quick and concise answers to the topical investment and economic questions that are on investors’ minds.

1. What is the latest on Brexit?

Prime Minister Boris Johnson is facing a major parliamentary showdown with opposition forces, as well as a rebellion from his own party, over his bid to take the UK out of the European Union, with or without a deal, by October 31’s fast-approaching deadline.

Last week, Parliament voted in favor of a bill that would force a request to delay Brexit until January 31, 2020, and against Johnson’s plan for a snap general election to regain control political control of the government. The situation, though, remains very fluid and fast developing.

Complicating matters further, any Brexit extension would have to be agreed upon by all EU members, and for now some European leaders don’t seem convinced that they should grant another delay.

We still feel odds are that eventually, the UK leaves the EU with a deal. Most economists and business groups think a no-deal scenario would be disastrous, erecting customs checks, tariffs and other barriers between Britain and its biggest trading partner.

But Brexit is extremely complicated, making it impossible to predict exactly how and when this will all play out. In the meantime, uncertainty around the issue continues to weigh on what is an already weakening European economy.

Our portfolio positioning, with a material underweight to European equities, reflects this reality. 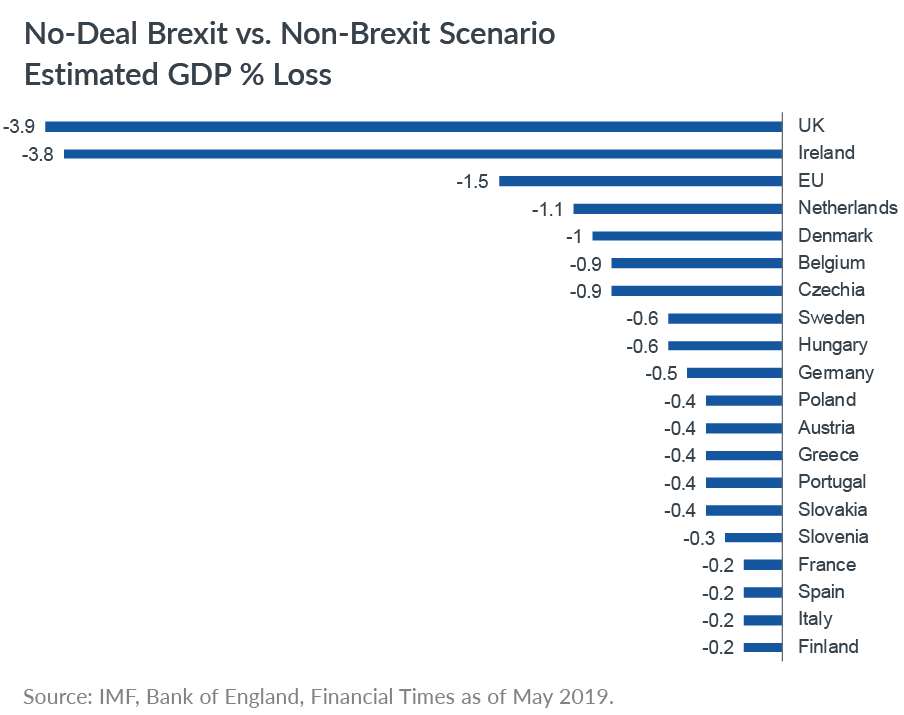 2. What are the ISM numbers telling us?

It is a tale of two cities. The manufacturing sector is in contraction mode, and the service sector is improving.

August’s ISM manufacturing report came in at 49.1; being a diffusion index, a reading below 50 indicates contraction. The report provides more evidence of the rising cost of the trade war with its impact on the manufacturing sector. The weakness was broad-based.

By comparison, the ISM non-manufacturing report had a significant rebound to 56.4, a jump of 2.7 points. This measures the service sector, which employs about 85% of the workforce. There were increases in 16 of the 18 industries, with one unchanged and one falling (wholesale trade — not a surprise based on the manufacturing report). This report provides a bit of relief that the broader economy has remained resilient to the weakness in manufacturing and global growth concerns.

The divergence has been increasing since the beginning of the year. Both of these reports, which are released early each month, will be picked over carefully to give us an idea of the future trajectory of the economy. 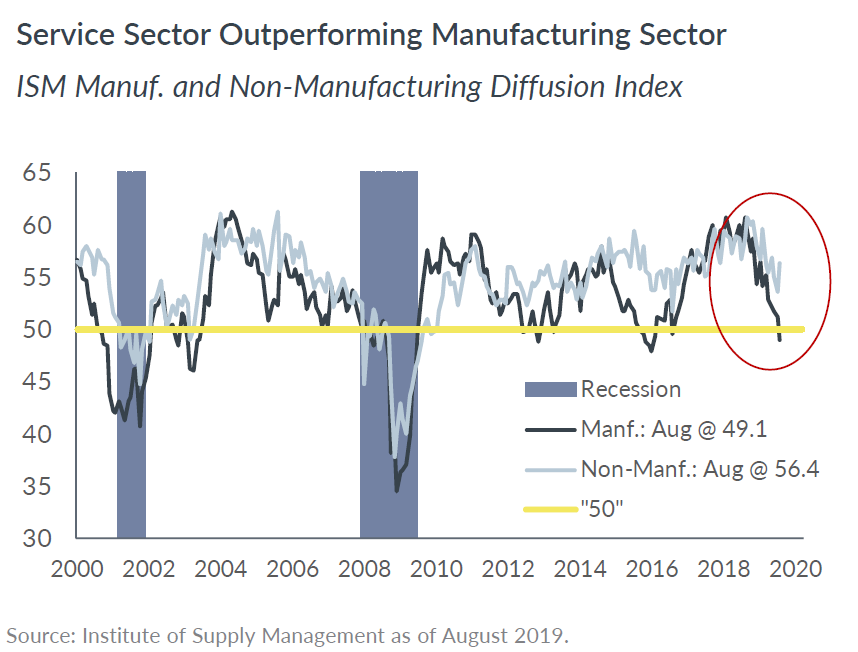 3. What do you expect from the Fed policy meeting on September 18th?

We expect the Federal Open Market Committee to cut the federal funds rate by 25 basis points to the median level of 1.875%. This will mark the Fed’s second rate cut following nine hikes over the past three-and-a-half years.

The markets put a high probability (95.8%) of a rate cut, with a small chance of a 50 bp cut (chart). Although Fed officials have a tone of optimism when they speak about the economy, they have been guiding the market toward easier monetary policy.

With the trade war underway for over a year, and seeming to be ramping up, the Fed is growing concerned. They have made it clear that they will manage monetary policy to help extend this expansion. 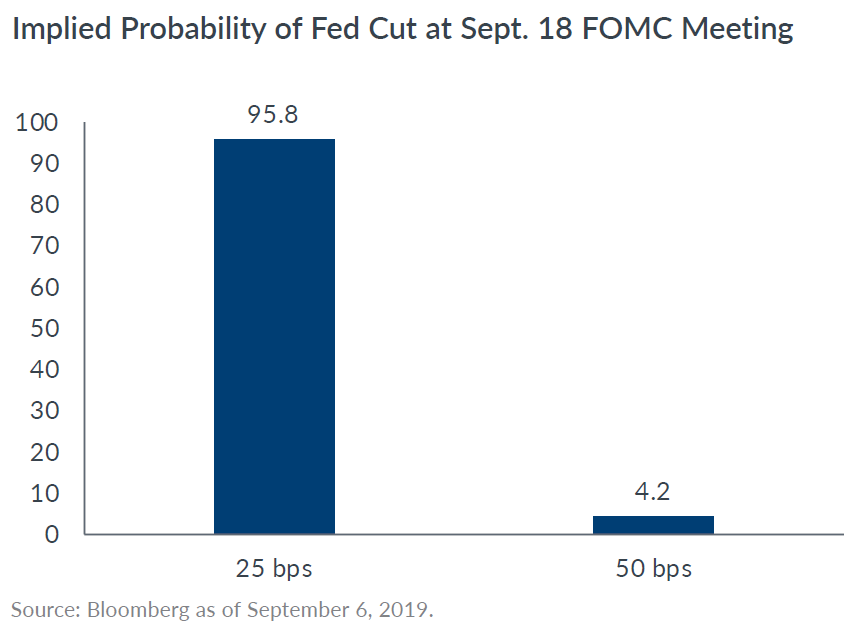 4. Are equity valuations a concern?

Equity valuations, although still reasonable in the context of today’s low interest rates, are beginning to look high from a historical perspective and do require close attention. High valuations are associated with lower long-term returns and provide a higher perch from which to fall in the next downturn.

Per our late-cycle playbook, we have taken measures to reduce this risk by focusing on lower P/E and higher quality, large cap and dividend paying stocks. However, it is important to note that bear markets historically have rarely been linked to high valuations alone. Usually, a combination of other factors such as recession, aggressive Fed tightening, or some kind of external shock is needed.

Over the shorter term, research shows that valuations have limited predictive value, and that factors such as the state of the business cycle, profit growth, sentiment, and momentum all tend to be more important. As a result, equity markets can and have remained expensive for extended periods. 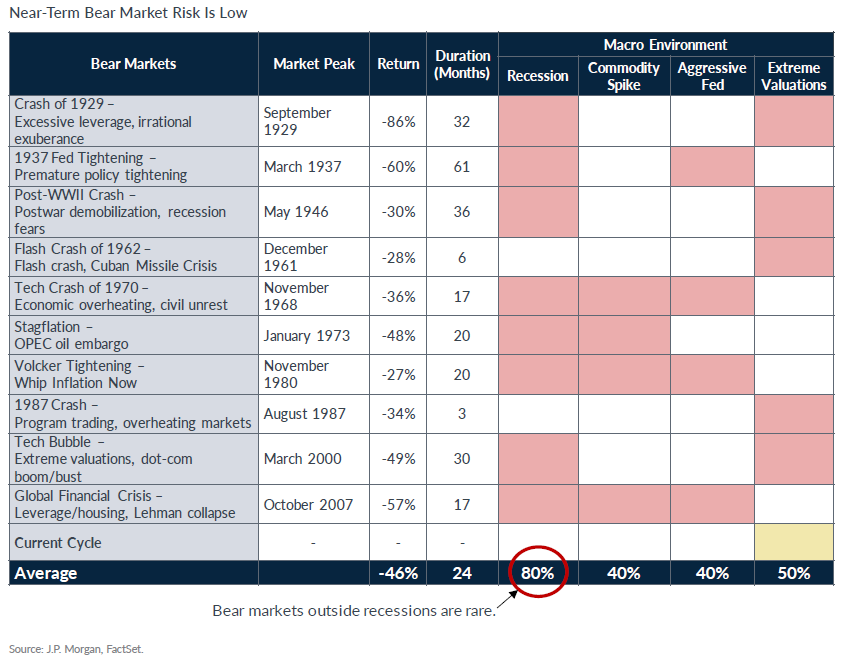 5. Is the labor market slowing?

It is, to some extent. There was slowdown in the monthly gains in nonfarm payrolls, with the rolling 12-month average peaking this past January (chart). But it is hard to make a true comparison. About a month ago, the Bureau of Labor Statistics said they plan to revise down past data. The 2018 drop will be about 40,000 per month. With that adjustment, hiring has slowed but not as abruptly as the current published figures indicate.

The labor force participation rate is at 63.2% and has been on an upward trend since hitting a cycle low of 62.4% back on September 2015. 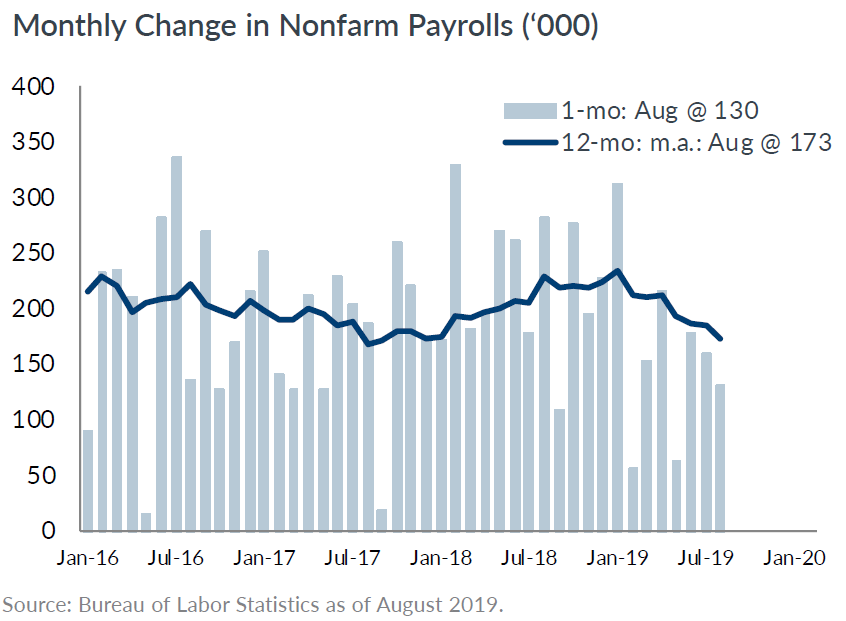 Given our continued positive assessment of the fundamental backdrop, we remain positive on equities in general and continue to see attractive prospects in the opportunistic fixed income class.

Late-cycle conditions of slowing growth and greater vulnerability to policy missteps will require investors to change their approach and be more selective in their portfolios.

None of this means there are not more opportunities ahead for investors, but gains are likely to be more muted. At the same time, concerns over global growth, trade tensions and the path of interest rates mean markets will likely continue to be subject to periodic swings in sentiment and potential pullbacks.

Our equity and fixed income research teams have made deliberate risk-mitigating changes to help fortify client portfolios against the type of market turbulence we have recently experienced while leaving them well-positioned to take advantage of opportunities that present themselves. 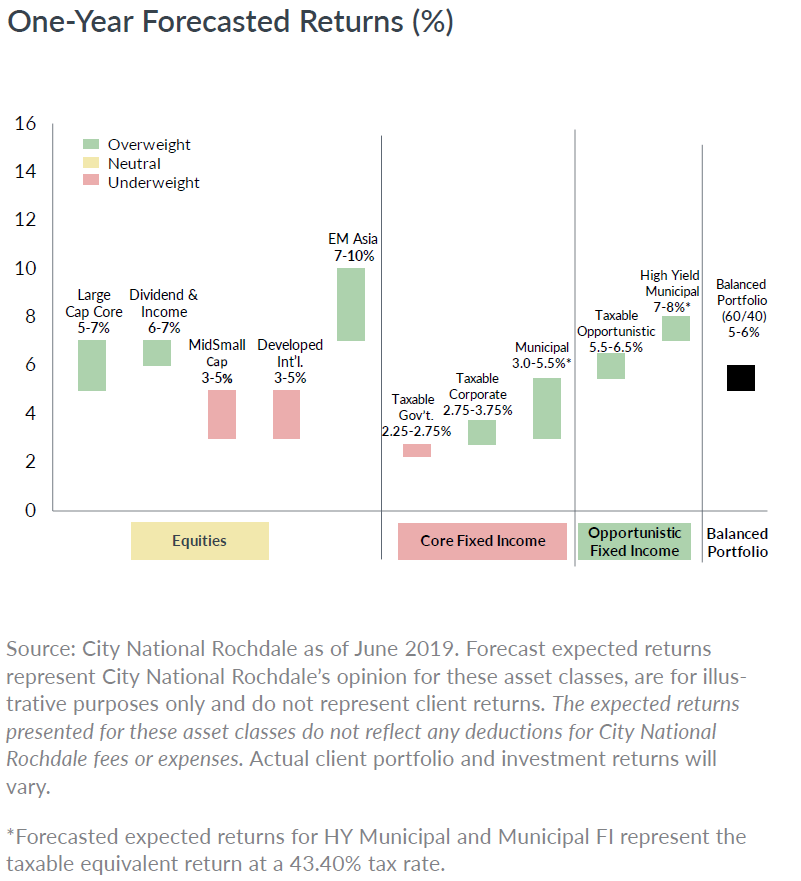 Source from On the Radar from CNR.com